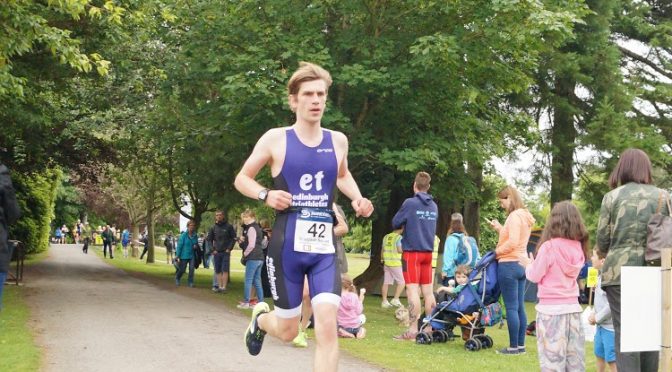 After feeling that I didn’t make the most of last year’s race at Monikie Country Park, I came back this year to improve on my race and finally get a famous post-race burger off the barbecue. The fact that it is such a good race, one of the Triathlon Scotland National Championships and one my club championship events didn’t hurt either!

Travelling by myself to this one meant I was actually on time for once! Easily had enough time for packet pick-up, body marking and setting up transition. Even had enough time to chat to the Technical Officials and Triathlon Scotland staff at the event.

Around 30s down on last year, but swimming a little further off course. That meant my swim speed/fitness was similar, so clearly I need to work on my sighting and keeping on course. I’m pretty sure I need a new wetsuit too – think this one might be constraining my shoulders a little. Yet another item on the wishlist…

The most important thing about the cycle section this year was that I didn’t nearly crash during it!

This meant that despite coming in 1 minute and 15 seconds down on my 2016 time, I felt like I was doing a lot better, and I entered the run feeling a lot more positive. It’s really funny how my perception could be altered like this.

The biggest downside to the bike course was the lack of on-site parking meant cars were parked on both sides of the course around the entrance to the park. Mix this inconsiderate parking with local traffic and we had quite a bit of congestion in this area. I chose to hang back but I did see some dangerous cycling going on here. I hope the race organisers can find some overflow parking nearby or better marshal this area as competitors are arriving next year.

Fast and smooth, can’t say fairer than that.

So this is where it really paid off to be in a better frame of mind this year. Compared with last year’s effort of 27:23, this was an easy place to gain minutes, mostly through being in the right mental state.

The course itself is 1 and a half laps of the two reservoirs that formed the swim course. It’s off-road but grassy rather than muddy and as you would expect from a club race – brilliantly marshalled.

Overall just slightly faster than last year, but with a much better feeling at the end of it.

And despite the weather’s best efforts, this year we did manage to get a BBQ going and get a burger at the end of the race, along with some wonderful cakes and sandwiches. M3 Triathlon Club’s hospitality is second to none!